PT Freeport Indonesia celebrated its 55th anniversary last April with a series of celebrations that included employees and the surrounding communities.

After having to celebrate its last two anniversaries virtually during the height of the pandemic, PTFI recently was able to commemorate its 55th year with a large gathering of employees and community members.

Clockwise from top left, a live music performance by Indonesian singer Sandhy Sondoro and featuring Tony Wenas, President Director-PTFI, kicked off the celebration at the Grasberg Block Cave underground mine. The party was followed by an event at Tembagapura Sports Hall that featured guest stars, such as singers Iyan Yoshua, top right, and Sonya Bara, bottom right.

At bottom center, employees and their children, contractors and community members participated in a performance depicting the PTFI journey through the years. In the bottom left photo, the musical performance at GBC Mine was acknowledged by the Indonesian Museum of Record as the first-ever musical performance held 4,000 feet underground. 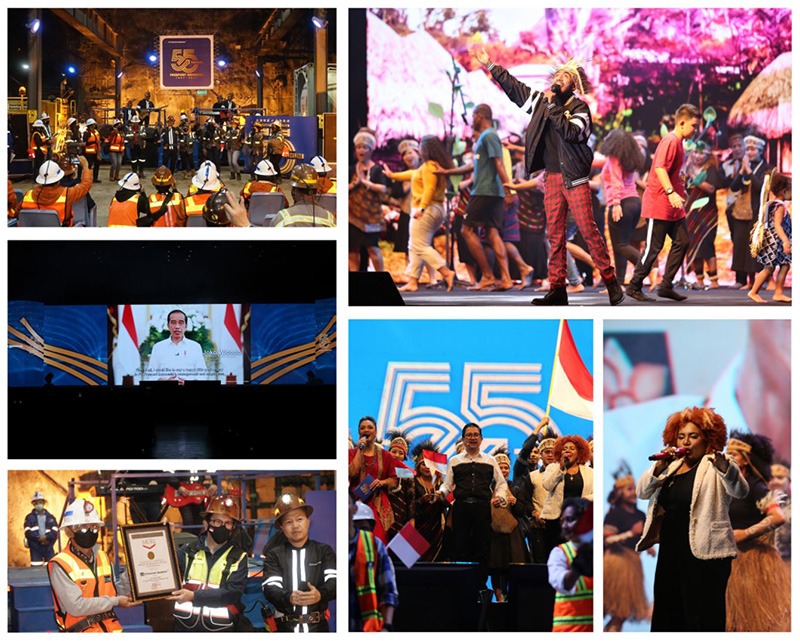 During the summit celebration, Joko Widodo, President of the Republic of Indonesia, congratulated PTFI through a pre-recorded video saluting its continuous contribution to the growth and prosperity of the nation. The summit event was centered in Tembagapura and simultaneously broadcast in Kuala Kencana and Jakarta, while a live performance was also held at each location for those were able to attend in person. Watch a highlight video of the celebration below.

Respect in The Context of Gender Diversity and Inclusion