Journey from Leadership Training to PTFI’s Diversity and Inclusion Team

Creating change for the better is the point of the competitive, nine-month fellowship that equips leaders to serve causes greater than themselves in a complex and globalized world – inspired by the work of its namesake, the late U.S. Sen. John McCain from Arizona.

Now back home in Indonesia after spending nine months in the United States, she hopes to make a difference with the knowledge she’s gained. As the newest member of the Diversity and Inclusion Team, she hit the ground running by getting involved in an important project – moderator of an event bringing together global company executives and Jobsite leadership to discuss gender diversity and SINCERE values. 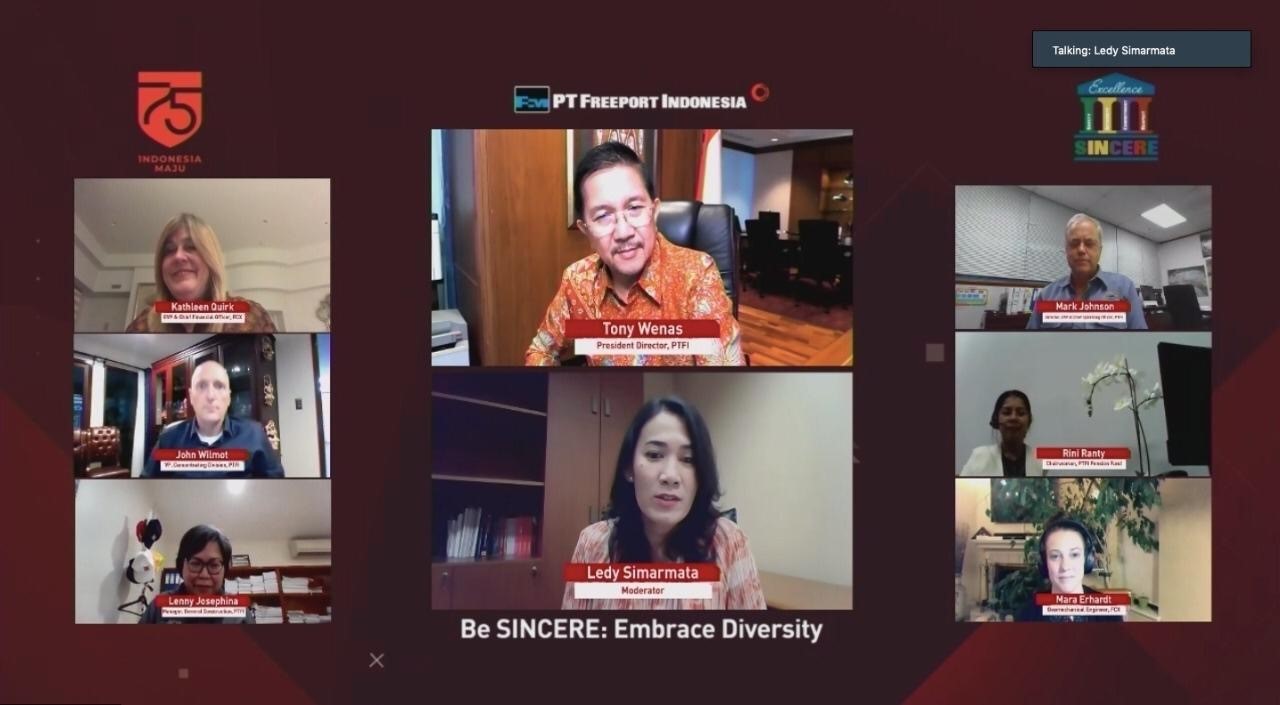 “SINCERE stands for Safety, Integrity, Commitment, Respect and Excellence, and it serves as guidance for everyone in the company on how to treat each other, including the approach to diversity and inclusion,” she said. “The discussion showcased this standard – and leaders were able to share and help our internal community embraces these values.”

In her first role as member of Freeport-McMoRan Diversity and Inclusion team, Ledy Simarmata, bottom middle, hosted the SINCERE event focusing on diversity and inclusion at PT Freeport Indonesia

SINCERE, which mirror the values detailed in the global Principles of Business Conduct act as a cornerstone of the company’s commitment to ethical business practices – from complying with laws to avoiding conflicts of interest to treating fellow colleagues and stakeholders with respect – key to encouraging women’s participation in the workforce.

“We are pleased that she is sharing what she has learned at the McCain Institute as part of our Diversity and Inclusion team as we work together to increase awareness about diversity in our organization,” said Kayla Guidroz, Technical Expert-Corporate Policy Alignment at PTFI and a member of the Diversity and Inclusion Team. “She shows a great deal of passion for our company values and will be an integral part of both the company’s future and the success of the Diversity team’s goals.” 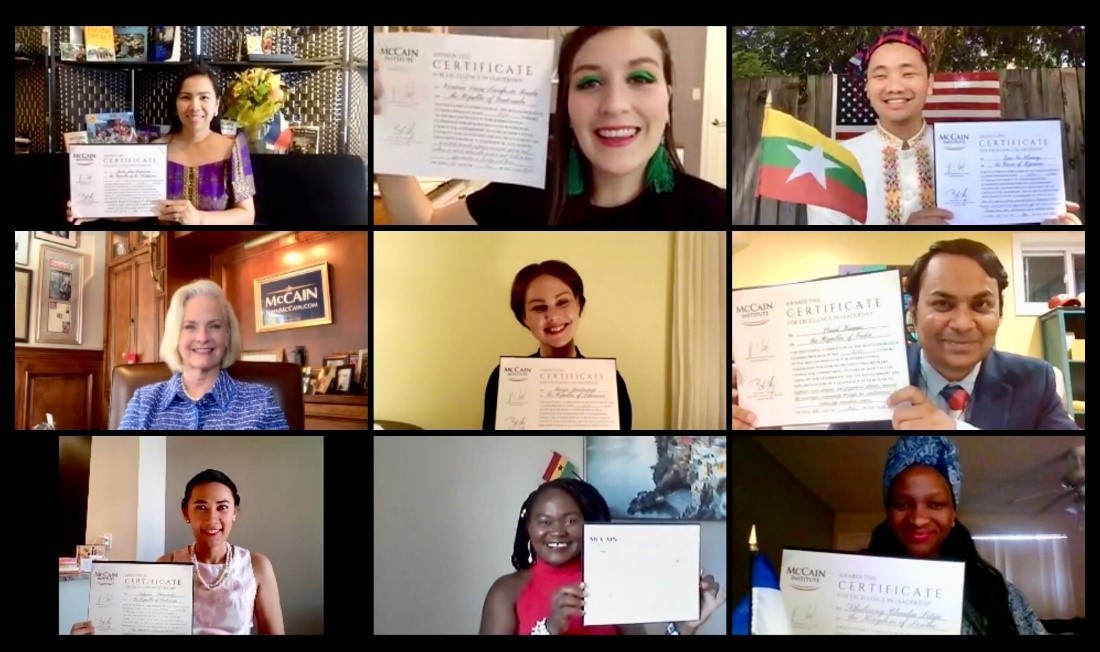 Ledy Simarmarta, bottom left, and her fellow graduates are pictured with Cindy McCain, center left, during the first ever virtual graduation ceremony.

“In Indonesia, we may be faced with unique challenges, but the women in our workforce are capable and competitive and paving the way for others. When we encourage a balanced representation of women and men, our organization is stronger and everyone benefits,” Simarmata said.

Perseverance in A Pandemic

Simarmata, a former national TV journalist, had earned her master's degree from The University of Manchester, as a recipient of the British Government’s Chevening Scholarship, and joined PTFI in 2012. Simarmata first joined the company's media relations team, tasked to foster a healthy relationship between PTFI and the Indonesian media.

Her experience in the McCain Institute’s Next Generation Leaders program began in September 2019 with meetings with the country’s leaders from various fields in Washington, D.C., and then New York City. She then worked on her leadership action plan as a visiting fellow at the Arizona State University's Decision Theater Network in Tempe, Arizona. She rose to the challenge of completing the program successfully during the pandemic, under lockdown.

"It was one of the strangest experiences of my life. Everything was right on schedule, but as we entered the last three months of the program, everything suddenly changed,” Simarmata said. “But learning about how the virus spread rapidly in the United States and how the country dealt with the pandemic was also an important leadership takeaway for us.” 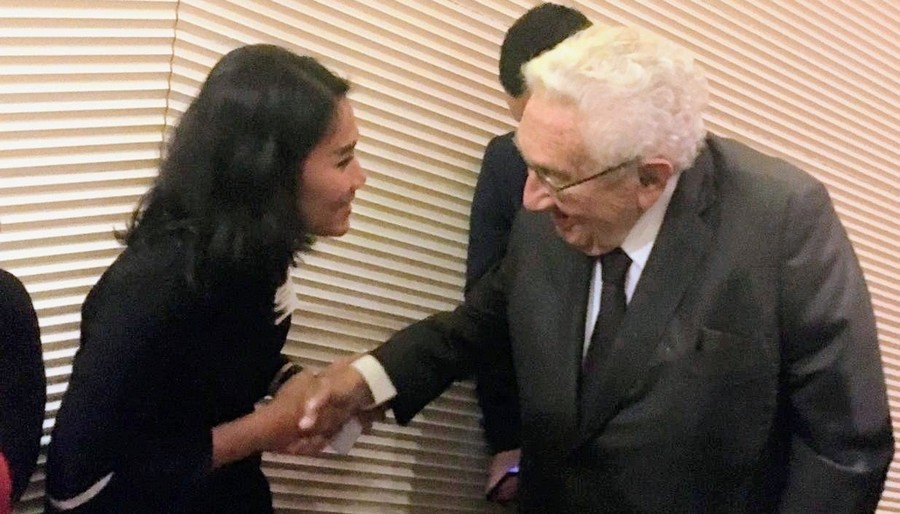 Simarmata completed the last three months of her fellowship in quarantine at her apartment in Arizona, half a world away from her family, friends and country as sessions went online and travel shut down.

As part of the program, Ledy Simarmata met with U.S. leaders, including Dr. Henry A. Kissinger, an American diplomat, Nobel Peace Prize recipient and 56th U.S. Secretary of State, in New York City

During the quarantine, she invited her fellow Next Generation Leaders participants – representing countries around the world – to create online conversations, sharing their ideas and leadership journeys. Based on the positive feedback from the group, she created a YouTube channel called “Talks with Ledy.”

“I’m grateful for the fellowship opportunity, and the camaraderie of the group motivated us to stay close and connected and to have each other’s back,” she said.