A rare species of ancient dog is not extinct in the wild as feared, according to a newly released scientific paper. 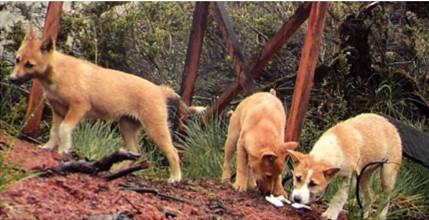 A recently released study offers scientific proof that a one-of-kind species of ancient dog thought to be extinct in the wild is in fact hanging on in a one-of-a-kind place, the Papuan Highlands surrounding the company’s Indonesian operations.

The evidence indicates the wild species known as the New Guinea Highland Wild Dog, which was first spotted in Papua New Guinea by a Dutch researcher in 1897, shares 72 percent of the genetic profile of dogs captured in Papua and brought to the U.S. in the 1970s.

That captive population, known as Singing Dogs for their distinctive howl, were thought to be the lone survivors of an extinct species that, much like Australian Dingoes, sit somewhere between wolves and modern dogs in the evolutionary timeline.

The latest study, published August 31, 2020, in the Proceedings of the National Academy of Sciences of the United States of America, confirmed the genetic diversity of samples collected by a team of field researchers led by James McIntyre, founder of the New Guinea Highland Wild Dog Federation. The lead author of the paper is Dr. Suriani Surbakti from the University of Papua.

PT Freeport Indonesia provided funding and logistic support for expeditions to track and study the Highland Wild Dog in 2016 with McIntyre and Denny Iyai and Johan Koibur from the State University of Papua and in 2018 with McIntyre in collaboration with Surbakti, Dr. Hendra Mauri and Dr. Margaretha Pangau of The University of Cenderawasih.

A third expedition originally scheduled for March of this year and canceled due to the coronavirus pandemic is re-scheduled for mid-2021.

“We have provided the finances for international researchers to work with local universities to supplement their efforts, including lodging, food and transportation to the wild areas,” said Jim Dellinger, Technical Expert-Environmental Planning and Implementation at PTFI. “We also have facilitated the research on site and set up communication with the local villagers to talk about the history of their relationship with the dogs.”

PTFI has done more than just pay and facilitate research, as its environmental commitment to preserving the biodiversity of its surroundings has created a de-facto refuge for hundreds of species of flora and fauna.

A hazy history of scientific mystery

Scientists have yet to definitively confirm when New Guinea Highland Wild Dogs first arrived in New Guinea, the second largest island in the world, but estimate that it was about 3,500 years ago, the same time dingoes arrived in Australia. Complicating matters was the presence of village dogs found in the Papuan Lowlands – and only a trained observer could distinguish them from captive Singing Dogs and the elusive dogs found in the Highlands. These village dogs are thought to be various combinations of domestic and feral dogs, including those brought to Papua thousands of years ago when the Chinese bred terriers as ratters to control vermin on ships.

McIntyre and his team collected blood, hair, saliva and scat from village dogs in the 2018 expedition, the results of which showed that while some of the dogs were in fact domestic or feral dogs, that at least two of the dogs had interbred with Highland Wild dogs.

The team also captured and released two dogs in the Highlands with radio collars to track their movement.

Researchers offer two reasons to explain why there is a 28 percent difference between the Highland Wild Dog specimens and those of the captive Singing Dog, rather than a 100 percent match:

Some of the confusion comes because there is interbreeding at the lower elevations down in Tembagapura, but this research indicates that the genetic material of dogs sampled in the Highlands is unique and isolated, so these Highland dogs are not interbreeding with the village dogs.

Drawing a link to the captive Singing Dogs brought to the U.S. in the 1970s to not only the Highland Dogs long spotted near Grasberg but also the village dogs found in the Lowlands has long been a conundrum.

As for distinguishing them from modern dogs, it can be hard to tell them apart from mere mongrels by looks alone. The research conducted on both captive Singing Dogs and the Highland Dogs has revealed significant differences in their biological makeup and behavior.

The behavioral trait that led to the naming of the captive animals as “Singing Dogs” stems from their unique howl. Sonograms have revealed that the rising and falling of their vocalizations are similar to that of humpback whales, and when howling in groups, one dog will begin “singing” and other dogs often join in at different pitches, as if harmonizing like a church choir.

King of the jungle, or rather rainforest

Papua, which has been geographically isolated since the last Ice Age, has marine and amphibious species such as crocodiles, but no species of cats, bears or primates on the island. That makes the Highland Wild Dog the mammalian version of Papua’s apex predator.

While news reports cited the failure to identify the species since the 1970s as evidence of their extinction in the wild, Papuan natives and PT Freeport Indonesia employees have long known the dogs were still around.

“The exception I’ve taken to most of the recent news articles is where they say these dogs haven’t been seen in a long time, because we see these dogs every day, and the locals have known about and interacted with them all along,” Dellinger said. 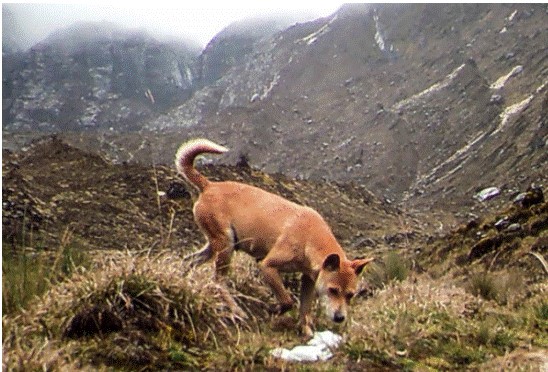 “The native people here venerate these dogs as their own ancestors, which is why they are so respected and tolerated rather than hunted down or chased off,” Puradyatmika said.