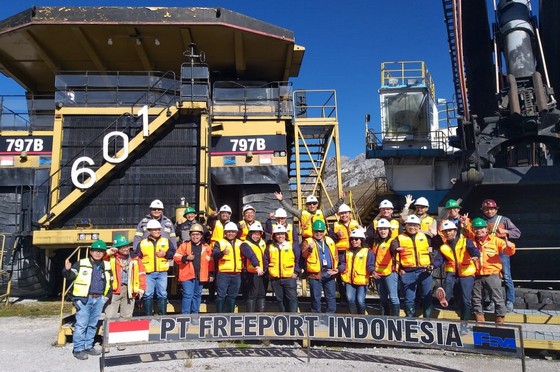 The visits included presentations and tours of PTFI facilities and programs in the Highlands and Lowlands as part of an ongoing effort to increase media understanding of mining. The tours were led by Riza Pratama, PTFI Vice President-Corporate Communications.

The two-day event kicked off with a presentation by Yahya Alkatiri, Manager-Governance and CSR Compliance, on PTFI’s community development programs.

In the Lowlands, media learned about tailings management and reclamation at the Center for Reclamation and Biodiversity at Mile Post 21.

Before the group moved to the Highlands, a visit to the Mimika Sport Complex in Timika showed journalists PTFI's support for the development of regional sports. The sports complex – built to international standards –  is anticipated to be one of the main supporting facilities for the XX PON event in Papua in 2020.

Next, a trip to the Highlands – always an adventure. Riding the bulletproof bus along the extreme uphill and winding routes to an altitude of 2,000 meters above sea level accompanied by vehicles with armed escorts was definitely not an everyday experience for the journalists.

Several journalists said this experience helped provide a better understanding of the safety and security challenges managed by PTFI.

Journalists then got a chance to see how the company celebrated the 73rd Republic of Indonesia's Independence Day in Tembagapura. Most Indonesians don’t have the chance to participate in the flag ceremony after leaving school unless they work in government agencies. But here, at an altitude of 2,000 meters above sea level, more than 1,000 employees from various divisions solemnly participated in the flag ceremony. Not to mention the many PTFI expatriate employees who also were present. It was an unusual sight.

The real journey began when the group visited the PTFI mining operations area. In the underground mining area, they were welcomed by Zulkifli Lambali, Executive Vice President-Site Operations and Technical Mine Manager accompanied by Chris Zimmer, Senior Vice President-Mine Underground. From the remote control room that uses Minegem technology, journalists learned about underground mining. They also met with the female operators who were working.

One of the journalists asked an operator, "What does independence mean to you?"

"I think independence is like here. Women can be independent, get a job in Minegem which was only for men. Now we are majority in the Minegem section." 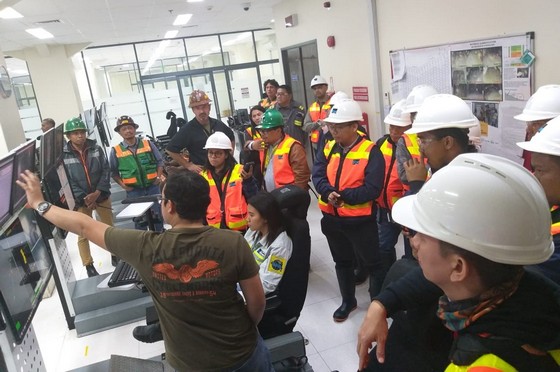 A visit to the DMLZ mine provided journalists with a more detailed understanding of the underground mine operation.

The trip to the Grasberg area at an altitude of 4,825 meters above sea level became an unforgettable experience for the media crew. Bright weather welcomed them as they met Carl Tauran, Senior Vice President-Operation Maintenance along with members of other Grasberg teams.

Zulkifli Lambali then led a discussion about the long-term plans for PTFI's mining operations, including the transition from open-pit mining to underground mining.

The visit to the operations area closed with Eko Purnomo, Senior Manager-Concentrating Operations at the processing plant / mill complex. He explained to the journalists as they looked directly at the processing facilities that overall stages of the ore processing process brings up to 95 percent added value in PTFI concentrate  products. 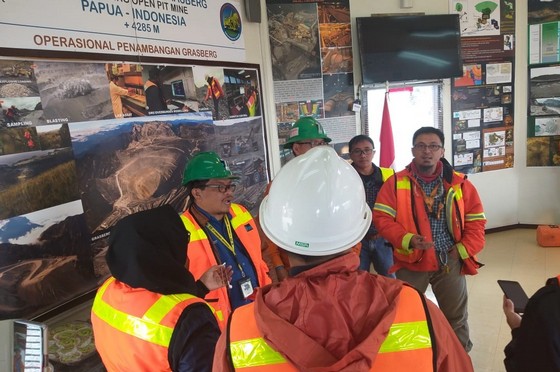 The group then went to Ridge Camp to see the facilities for employees provided by PTFI , including the Superblock complex.
Journalists were amazed at how such a modern and complete facility can be built in a remote area.

One reporter said what he heard while having a short conversation with one of the employees while eating at messhall; "Too much Freeport has given to our families compared to our hatred of Freeport's policy." "Now I can better understand what the employee is saying," said the fellow journalist.

One journalist wrote down the impression gained from this visit.

"It is very reasonable if Freeport always asks for certainty regarding the extension of the contract. Seeing the investment that must be disbursed, both for underground mining and for smelters, long-term contracts will ensure that the investment disbursed is economical or at least has a profitable return on investment. National interests, in this case, are actually ensuring that the transition era, from open pit to underground, from current management to new management can run smoothly, so that the sustainable and value-added management of the Freeport mine for all parties can continue. If not, no one wins in this matter. "

Mark Johnson, President-Indonesia Operations  expressed his gratitude and appreciation to the journalists for visiting during a closing dinner held for the group.

"This is an extraordinary place where people who are also extraordinary work diligently and build careers for decades. Hopefully this visit will be an insightful experience." (Stefanus Branco)

Around the Company in Video